Cris Busato Smith, Brazil Regional Editor for the MIT Global Shakespeares Video and Performance Archive, gave two talks at the 22nd Annual ACMRS Conference held 3-6 February 2016 in Phoenix, Arizona: “Brazilian Shakespeares,” delivered on February 4 as part of the panel “Dead at 400: Shakespeare, Cervantes and El Inca Garcilasco,” and “Ophelia in Contemporary Brazilian Art,” delivered on February 6.  This interdisciplinary conference in Medieval and Renaissance Studies is hosted by the Arizona Center for Medieval and Renaissance Studies (ACMRS) at the Arizona State University. To learn more about the ACMRS, please visit https://acmrs.org

One of the Folger Shakespeare Library’s copies of Shakespeare’s First Folio is touring the United States and currently on display February 15 to March 15 at the Arizona State Museum in Tucson. During this time, the University of Arizona is hosting many events to join in the celebration of 400 years of Shakespeare. One of its workshops, “Shakespeare First! From Page to Stage!” took place on February 20 and was streamed live to the Mesa Public Library and the Yuma Main Library. Dr. Busato Smith was on hand at the Mesa Public Library as a special guest presenting her talk: “‘Wheresoe’er Thou Art in this World’s Globe’:  the MIT Global Shakespeares Digital Archive”.

Cris Busato Smith also has a forthcoming essay publication in The Shakespearean International Yearbook, entitled  “What ceremony else?” Images of Ophelia in Brazil: the Politics of Subversion of the Female Artist. 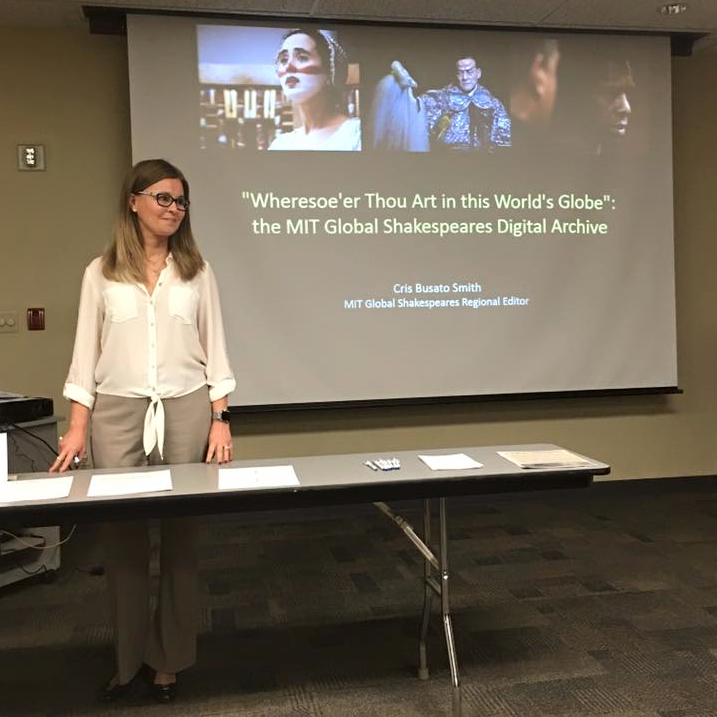