Donna Woodford-Gormley‘s new book, Shakespeare in Cuba (2021) in the Global Shakespeares series edited by Alexa Alice Joubin, uses the lens of cultural anthropophagy to explore Cuban adaptations of Shakespeare.  According to the theory of cultural anthropophagy, or literary cannibalism, a culture, like Cuba, can consume Shakespearean plays, but digest them and embody them in new ways, giving life to both the consumed and the consumer. The theory has its roots in Latin America, and so it is an appropriate tool for examining how Shakespeare’s plays have been consumed, digested, and embodied in Cuban forms, but it is also an inclusive theory that places neither culture in a position of subservience and allows all to join the feast.

The subtitle of the book: “Caliban’s Books,” alludes to Caliban’s instructions to Stefano and Trinculo to steal Prospero’s books. Cuban artists, this book suggests, have taken Caliban’s suggestion and possessed Shakespeare’s books, consuming them, digesting them, and making them their own. 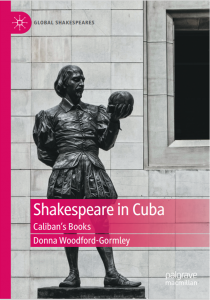 While the theory of cultural anthropophagy is applied to all the Cuban adaptations discussed in Shakespeare in Cuba, these adaptations embody Shakespeare in many different ways. Some works engage with and enter into a discussion about the colonial history of Cuba and Latin America. For example, one of the best known Cuban adaptations of Shakespeare is Roberto Fernández Retamar’s landmark essay, “Caliban.” In this essay Fernández Retamar takes on the voice of Caliban and uses it to speak back to Prospero and to colonizers.

A later Cuban adaptation of the play, however, takes a different approach. Teatro Buendía’s Otra tempestad [Another tempest] combines characters from The Tempest with characters from other Shakespearean plays and with elements of Cuban culture. The Shakespearean characters find themselves shipwrecked on the island of Cuba, where they encounter afro-Cuban orishas, the deities brought to Cuba by the slaves. In Otra tempestad these deities are the daughters of Sycorax, but the Shakespearean characters continually mistake them for people they left behind in the old world. Flora Lauten and Raquel Carrió, the director and dramaturge of this play, explained that they were trying to move beyond either faithfully imitating Shakespeare’s play or speaking back to the colonizer. They wanted to create a third language that would allow for a dialogue between the Shakespearean original and the Cuban response. The Caliban of their play represents that third language. A video of Otra tempestad is available at NYU’s Hemispheric Institute.

Unsurprisingly, given that Cuba’s 1959 revolution has been one of the most notable events in the country’s recent history, other Cuban adaptations of Shakespeare are overtly political. Romeo y Julieta en Luyanó, for example, was written and performed by members of a CDR or Committee in Defense of the Revolution. CDRs are neighborhood groups, established by Fidel Castro in 1960. They are charged with attending to the needs of a community, including promoting public health campaigns and encouraging education and involvement in the arts. However, they are also responsible for policing the revolutionary or counterrevolutionary behavior of the community members. This play shows the CDR accomplishing all of these tasks. The amateur actors and writers involved in creating the play repeatedly assert the revolutionary ideals of the characters and participants, while also demonstrating the importance of community artistic involvement in Cuba.

In addition to incorporating references to Cuban politics, the play also combines allusions to Romeo and Juliet with revolutionary Cuban traditions of using theatre to involve community members in the resolution of their own problems. Several Cuban theatres in the 1960s and 1970s either used professional actors to dramatize social problems and then invited the audience to debate and discuss the issues after the play, or they involved the community members themselves in creating and performing a play that would allow them to act out a solution to their problems. Romeo y Julieta en Luyanó similarly engages members of a CDR in acting out the drama of two young people who could be separated if one of them leaves the country and moves with his father to Miami.

While Romeo y Julieta en Luyanó consumes Shakespeare and embodies it in a way that promotes the Cuban Revolution, other Cuban playwrights have created works that have explored political and cultural problems in Cuba. For example, although Afro-Cuban playwright Tomás González was an ardent revolutionary, his Shakespeare adaptations explore the racism and censorship he experienced during the quinquenio gris¸ or five year gray period, a period of particularly harsh censorship in Cuba in the 1970s. González was banned from the theatres for casting black actors in his Hamlet in 1972, and as a result, much of his work remained unpublished and unperformed until much later. His Shakespeare adaptations, including Yago tiene feeling, El bello arte de ser, and Ote vino en un charter take characters from Othello and Hamlet and set them in 20th century Havana, where they discuss racism in Cuba and elsewhere and the role of the artist in the revolution. Though the characters in his Shakespeare adaptations do ultimately support Cuba and the revolution, they also explore many of the problems in Cuba, especially during the quinquenio gris.

Many Cuban Shakespeares, however, veer away from the political to the playful, as is the case with the film collaborations of Italian director David Riondino and Cuban poet Alexis Díaz-Pimienta. These films explore the practice of repentismo, or improvisational poetry, which is popular in Cuba. Repentistas will often be given a prompt or a line of poetry and then they will improvise a ten-line, octosyllabic stanza known as a décima.  In three of the film collaborations of Riondino and Díaz-Pimienta, the prompt comes from Shakespeare. Otello all improvvisso, shows a group of Cuban repentistas improvising Othello, while Shakespeare in Avana  and AEDOS, el mundo en versos both document repentistas improvising poetry inspired by Romeo and Juliet. In all three films the repentistas joyfully recreate Shakespeare’s plays, often adding humor and parody, which are common features of cultural anthropophagy. These improvisational poets are not making political statements or cultural claims, but are indulging in wordplay, humor, and creativity.

Still other Cuban consumptions of Shakespeare do not appear specifically Cuban.  Estudio Teatral de Santa Clara’s Piel de violetas [Flesh of violets] is a one-woman show that retells Hamlet from Ophelia’s point of view.  When director Joel Saez and Actress Roxanna Pineda spoke about their creation of this play, they explained that they were not attempting to make a Cuban version of Shakespeare. They simply wanted to create a character driven story, and they found Ophelia to be a compelling character, one who stayed with them after seeing or reading Hamlet. While their play does not combine two national cultures, as many examples of cultural anthropophagy do, it is still consumes Shakespeare. In this case the play illustrates a feminist anthropophagy, in which the often-silenced Ophelia consumes the voices of Hamlet, Laertes, and Polonius in order to tell her side of the story.

While Piel de violetas does not emphasize the national Cuban culture, other productions actually consume Shakespeare in order to bring together two cultures. This is the case with the works of Company HavanaBama, which brought together Cuban and American actors under the direction of American director and theatre professor, Seth Panitch of the University of Alabama. The bi-cultural companies performances of Merchant of Venice and A Midsummer Night’s Dream consumed Shakespeare in order to create a bridge between the two cultures.

What the works explored in this book have in common is their consumption of Shakespeare by Cuban artists and the lens of cultural anthropophagy that Woodford-Gormley uses to examine them.  The book as a whole, however, demonstrates that Cuban Shakespeares vary widely in the ways that the bard is digested and incorporated into new works.

This essay is written by Professor Donna Woodford-Gormley. She can be reached at dwoodford@nmhu.edu