The Tempest
prev next

Shakespeare’s The Tempest is transported to 5th century Korea in this dramatic re imagining and adaptation of his final and most poetic play. King Zilzi, immersed in his study of Taoist magic, leaves the care of his kingdom in the hands of King Zabi. While he is away, Zabi takes control and, with the help of Zilzi’s brother, Soji, banishes him from his lands.

Inspired by a true story from the Korean Chronicles of the Three Kingdoms, Tae-Suk Oh’s The Tempest blends extraordinary historical fact with Shakespearean fiction, infusing both with elements of traditional Korean culture and folklore. Prospero’s book of magic transforms into a multi-coloured magical fan, Caliban becomes Ssangdua – a two-headed monster – and Ariel becomes Zewoong, a Shaman priestess made of straw and the protector and dispeller of evil spirits.

With music played on traditional Korean instruments and incorporating richly layered costumes, this fantastical production explores the limitations and possibilities of human nature through the acts of betrayal, love, forgiveness and eventual reconciliation.

Master Oh is founder and artistic director of Mokhwa Repertory Theatre Company (f. 1984). He is a playwright, director, and acting teacher in Korea. He began playwriting in 1968 and his over sixty original plays are rooted in Korea’s cultural past and present, archetypes and unconsciousness. He has established a unique theatre methodology based on traditional Korean aesthetics, language, and expressions. Recently, Oh’s adaptations of Shakespeare’s plays have garnered international acclaim including The Herald Angel’s Award at the 2011 Edinburgh International Arts Festival. He is an Emeritus Professor in Theatre at Seoul Institute of the Arts. His adaptation of Romeo and Juliet has toured world wide.

This video interview of the Korean director Oh Tae-suk was made in 2005 as publicity material for a theatre performance at an auditorium of California State University.

Can Shakespeare’s plays give a “local habitation” to the “airy nothing” of globalization? Shakespeare is proclaimed, once again, the bearer of universal currency and Britain’s national poet as the London Olympics draw nearer.more

Can Shakespeare’s plays give a “local habitation” to the “airy nothing” of globalization? Shakespeare is proclaimed, once again, the bearer of universal currency and Britain’s national poet as the London Olympics draw nearer. Much more ambitious than the Royal Shakespeare Company’s 2006 “Complete Works” Festival, the World Shakespeare Festival in summer 2012 will bring theatre companies from different parts of the world to perform Shakespeare in their own languages. Shakespeare has been transformed from Britain’s export to import industry, but the meaning of this “return” is ambiguous. 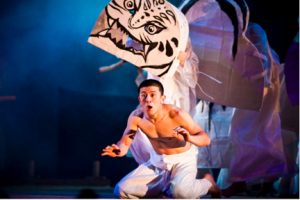 But a story of cultural globalization already unfolded last year at the 2011 Edinburgh International Festival which featured Asian performing arts ranging from theatre to ballet. The renowned South Korean stage director and playwright Oh Tae-suk mounted his version of The Tempest to critical acclaim in Edinburgh. Master Oh’s adaptation brought the play born at the “dawning moment of British colonialism” and inspired by “the wreck of a ship bound for Virginia” to the shore of traditional Korea, and back to the U.K. (Michael Dobson, “Shakespeare and Korea,” play bill of the Mokwha Repertory Company’s The Tempest, Edinburgh, August 13-16, 2011, n.p.). A work that has routinely been politicized by artists in nations that were formerly colonized, The Tempest was transformed by Oh into a play infused with a sense of lightness and Oh’s wit. Like Prospero, the Daoist magician King Zilzi rules the island and orchestrates the shipwreck out of revenge. But he brings the men to his island partly because it is high time his fifteen-year-old daughter “met somebody.” The Korean Miranda later reminds her suitor that the question about her purity is ridiculous, after all she has grown up on “a desert island.” The European premiere of Oh’s Tempest demonstrates that while works that criticize global inequalities receive more attention from Western critics, the genre of productions critical of resource inequities or the geo-political status quo, represent but one perspective. Oh’s version is not exactly a rollicking comedy, but extrapolates something extraordinary from both the Elizabethan genre of romance and the Korean tradition of hybrid theatrical genres.

Many people have seen international Shakespearean performances—and some of these works have become canonical and well-rehearsed success stories of cross-cultural ventures, such as the postwar Japanese director Kurosawa Akira’s Ran and Throne of Blood—but few people are aware that there is a rich and complex history of international performances of Shakespeare. This history complicates the notion of globalization as necessarily just “global Westernization” (Amartya Sen, “How to Judge Globalism,” The American Prospect, special supplement, Winter 2002, http://prospect.org/cs/articles?article=how_to_judge_globalism, accessed September 1, 2011). Examining Shakespeare’s place in world cultures and the impact of diverse theatrical traditions on Shakespearean performance can lead to a deeper understanding and appreciation of the processes of globalization and localization. Globalization and digital culture are two of the catch phrases for our time, but they remain an imprecise term in the classroom and popular discourse about cultural difference and assimilation.

Shakespeare’s global career began in his lifetime. Performances in England in the sixteenth and seventeenth centuries had a global flair. European visitors such as Thomas Platter left behind diary records of plays they saw at the Globe in London in 1599. Shortly after appearing on stage in London, Shakespeare’s plays traveled to Europe through polyglot performances mounted by touring English players, which helped to initiate translations of the plays into the vernaculars such as Dutch, German, and French, and to spread the plays to Russia and other parts of the world. Take Hamlet for example. The play was performed under varying conditions on board the Red Dragon, a vessel of the East India Company, near what is now Sierra Leone in 1607, on the island of Socotra in 1608, and possibly in a Dutch fortress in Jayakarta in colonial Indonesia in 1609. As the centuries wore on, Shakespeare was made to speak in a diverse range of tongues for and against the same political cause in Asia and beyond. As we enter the second decade of the twenty-first century, both Asian-centric and Asian-inspired performances of Shakespeare have taken center stage. There are traditional productions such as Oh’s Tempest that use Shakespeare to rethink Korean history. There are also performances that are inspired by Asian elements such as Kenneth Branagh’s film As You Like It which deal with values that are believed to transcend cultures.