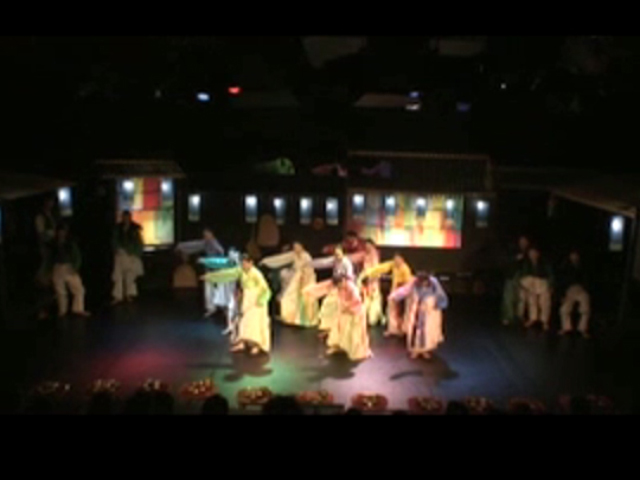 Romeo and Juliet is Oh Tae-suk’s first adaptation of Shakespeare. His choice was deliberate: Two lovers caught in between warring families in a divided community — a pretty good analogue for the Korean situation. Oh’s adaptation is designed as an apology to Korea’s youth from the older generations for their failure to resolve their country’s troubles. So the strife between the families is played up. The two families need little provocation to be at each other’s throats; the prince is deliberately portrayed as a weak and ineffectual leader; the stabbings of Mercutio and Tybalt take place in a bathtub, presumably in a reference to the lunatic asylum of Marat / Sade. And in a final warning, the deaths of the two lovers bring about not reconciliation but more bloodshed.

Given this background, we should feel a level of sympathy with the star-crossed lovers. But Romeo, along with his chums, initially comes across as crudely focused on carnal pleasures. Juliet and her friends come across as similarly sex-starved. It is only once the pair has had their first encounter at the party that we begin to be interested in the relationship and want them to overcome the family feud. Juliet in particular is very winning.

Visually, the performance is impressive. The white silk sheet covering the stage in the love scene, and the red sheet in the Capulets’ tomb, are effective; and the choreography both of the dances and the fights well-staged. Aurally, some of the background music is pleasant, Korean-style traditional music; some is more modern and doesn’t feel terribly appropriate — this cosmopolitanism is possibly another feature of Korean productions: I noticed a similar jarring use of music in the soundtrack to the swordplay saga Bichunmoo.

I wish I’d read the programme notes before the performance started. As I struggled to remember the details of the Shakespeare original from O level studies 30 years ago I thought to myself that certain passages had been left out. The programme explains, and Oh himself confirmed after the performance, that his trademark stagecraft techniques include skips and omissions, leaving the audience to fill in the gaps. In fact the audience is made to work harder than usual. Most of the dialogue is outward-facing; and when the lusty youths are eyeing up the comely maidens it is in fact the audience they are looking at: the girls are downstage. The audience is even asked to advise Romeo on whether to tell Tybalt that he’s married to Juliet. All this, Oh explained, is part of the Asian performance tradition, where in Noh, Kabuki and Peking Opera the actors address the audience rather than each other.

Other Korean twists — apart from the more obvious ones like the soju-swilling nurse; the bean paste which is necessary to make Juliet’s potion work; and one family insulting the other by reminding them of their background in the butchery business — include the genre-bending that is familiar to Korean film watchers: there’s certainly more visual humour than one expects in a conventional Shakespearean performance — from the slo-mo martial arts film pastiche in one of the fight scenes (a technique also used in Jump earlier this year) to the frankly tiresome slapstick in the love scene.

Yet maybe such criticism is misplaced. Oh’s adaptation is geared towards Korean audiences, of which 70% are of college age. In Korea, says Oh, Shakespeare has been locked up in the classroom and burdened with over-reverential academic study. It has never benefited from breathing on stage. Oh, as a teacher as well as a practitioner, therefore felt drawn to bring it out from the classroom. So as well as this adaptation being an apology for the older generation’s failures, it is designed as a gift to Korea’s youth. For Shakespeare to have been popular 400 years ago, argues Oh, his plays must have been fun. So Oh is bringing the great-grandfather of theatre to Korea and bringing him up-to-date in a way that contemporary Korean audiences can identify with. Shakespeare has deep roots and is not easily swayed by the wind, says Oh, meaning that he can survive any adaptation. By all accounts, Oh’s Romeo and Juliet has been successful in Korea, playing to audiences of 600 or more, who have been laughing throughout. And the capacity audience at the Barbican also enjoyed the humour.

Alexa Alice Joubin, Regional Editor for Asia, provided the description and additional details about the production.

Master Oh is founder and artistic director of Mokhwa Repertory Theatre Company (f. 1984). He is a playwright, director, and acting teacher in Korea. He began playwriting in 1968 and his over sixty original plays are rooted in Korea’s cultural past and present, archetypes and unconsciousness. He has established a unique theatre methodology based on traditional Korean aesthetics, language, and expressions. Recently, Oh’s adaptations of Shakespeare’s plays have garnered international acclaim including The Herald Angel’s Award at the 2011 Edinburgh International Arts Festival. He is an Emeritus Professor in Theatre at Seoul Institute of the Arts. His adaptation of Romeo and Juliet has toured world wide.

This video interview of the Korean director Oh Tae-suk was made in 2005 as publicity material for a theatre performance at an auditorium of California State University.