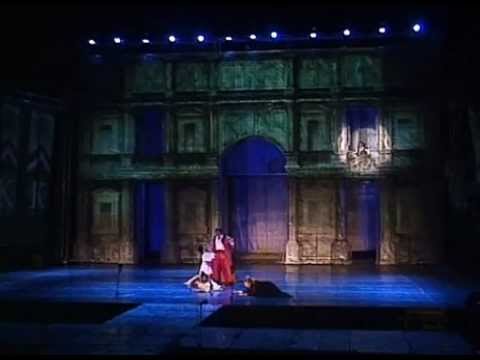 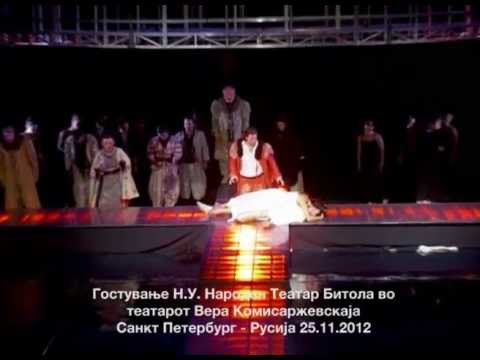 Last night the local mayor who had once played Hamlet in the state theatre inaugurated the first Bitola Shakespeare Festival. It opened grandly with a bilingual Macedonian and Russian production of Romeo and Juliet performed by the Vera Komissarzhevskaya Theatre, St Petersburg and the National Theatre Bitola.

The 850-seat theatre – the largest of the National Theatre’s stage spaces — shaped much of the production’s action and meaning. Opening to the frenetic rhythms of Prokofiev’s Romeo and Juliet, choreographed fighting between darkly dressed corps of Capulets and Montagues established an aesthetic of classical ballet or grand opera. This formality was matched by a huge multilevel Roman proscenium that filled the entire back wall of the stage. It recalled the 2nd-century Roman amphitheatre in nearby Heraclea Lyncestis, thus suggesting continuity between Bitola’s ancient dramatic heritage and its vibrant modern theatre culture.

At first I found that the vast playing space and highly wrought movements made it difficult to engage with emotions of the characters. But as the performance continued it seemed to me that director Dejan Projkovski was using the distancing effects of physical scale and conscious artistry strategically. As the classical proscenium also suggested, his production framed Shakespeare’s play as a tragedy of fate. The irreducibly conflicted circumstances of the lovers’ world ultimately dominates their efforts to transcend it through romantic love.

Romeo’s journey was accordingly one of existentially crushed rather than defiant aspirations. He began far differently from the self-absorbed melancholic of Shakespeare’s text. Nearly as cocky as Mercutio, Romeo needed little persuading to gate-crash the Capulet’s ball. The Queen Mab speech declared their shared need for constant physical and imaginative stimulation. Along with an equally laddish Benvolio, they mocked their hosts by mimicking a little tea party, pinkies foppishly extended, exchanging pleasantries in English accents. But afterwards Romeo read the tea leaves in his cup, momentarily shaken by the dark future they appeared to presage.

Juliet was also a departure from the bashful 13-yr old of traditional productions. She was delighted by her mother’s talk of marriage to Paris, girlishly excited to try on a fine wedding veil. In her well-mannered way she had absorbed the Nurse’s fantasies of marriage as a golden social and erotic opportunity. During the ball, danced to the ironic music of Prokofiev’s feud, Romeo appeared to transfer his affections from Rosaline to Juliet seamlessly. Yet later Rosaline appeared to speak an invented monologue which seemed to curse his betrayal. (I could only gather an impression because I don’t know the Russian spoken by the Capulets or the Macedonian spoken by the Montagues.)

When the lovers first encountered each other, Romeo was physically bold, even slightly aggressive, while Juliet’s interplay of hands seemed as eagerly exploratory as modestly shielding. At their parting she even stole a chaste kiss from him. For the balcony scene, Projkovski used the large space of the theatre to show the gulf between the feuding families being symbolically bridged. Juliet appeared at a window in the backstage proscenium, while Romeo lay on his back in the middle of stalls, spotlit, before advancing to the stage during his alternating monologues with Juliet. Then, addressing Romeo directly, she joined him at centre stage and took the lead physically and verbally in arranging their clandestine marriage.

In the consummation scene that followed Tybalt’s death and Romeo’s banishment, the lovers lay embraced at the centre-stage crossroads. Falling rose petals (later doubling as gouts of blood) were projected onto the proscenium as soft Prokofiev strings played in the background. For a few lovely minutes, lyricism competed with temporal and worldly ironies. But ultimately, I felt, the operatic aesthetic dwarfed the spoken expression of the moment, making it more aesthetically than emotionally engaging. The effect of distance again pointed towards Projkovski’s interpretation. Even in this most intimate of scenes, the lovers were always struggling to resist a star-crossing fate insistently expressing itself in stylized anticipations of death.

The effect on Romeo was to transform him from a young man of boundless self-confidence into a shattered lover. I thought he captured this change most sharply when he came to Friar Lawrence in despair after his banishment. Although Lawrence managed to thwart Romeo’s thoughts of suicide, it was the Nurse to whom he turned for real if temporary comfort. Like a hurt little boy, he clutched her skirts and allowed her to cradle him in the same way that she had soothed the distraught Juliet in the scene before.

But unlike Romeo, Juliet moved on from this moment. Her struggles were more authentically embodied, and spectators could feel her determined emotions because she connected directly with audience, above all in her moving soliloquy, ‘Gallop apace, ye fiery footed steeds.’ Speaking from the stage apron, she downsized the anticipated big aria. Her hopes and fears were persuasively nuanced because they came from within. When she was abused in turns by her brutal father and the sexually rapacious Paris, Juliet worked her body in beautifully supple ways to express both her inner distress and fierce resolve to seek her own way.

Both lovers’ journeys were partly redirected, however, by the production’s biggest change to Shakespeare’s script. A gloomy Friar Lawrence, appearing more burdened by life’s miseries than hopeful by his religion, gave Juliet the sleeping potion to allow her to avoid consummating marriage with Paris rather than to enable a complicated future reunion with Romeo. The business of misdirected letters and the apothecary was cut (or, our knowledge assumed), so that the action moved directly from Juliet’s funeral to the lovers’ final private encounter in the tomb. Overwhelmed by grief at the sight of Juliet’s apparently lifeless body, Romeo swallowed poison and collapsed disconsolate. Juliet woke up to match his sacrifice with one quiet thrust of her lover’s dagger as she lay stretched upon him. The relative restraint of this ending generated genuine emotional power. But in keeping with the production overall, its ambiguity as a sacrifice allowed the play’s wider conflicted world to prevail, as the grief-stricken Montagues and Capulets made only tentative gestures of reconciliation before a helpless Prince and silent Friar Lawrence.

Bitola’s National Theatre of Macedonia is boldly picking up where last year’s brilliant Globe-to-Globe Festival in London left off.

International festivals and local companies world-wide have long been reshaping Shakespeare as a multilingual and multicultural dramatic property. As part of the 2012 Cultural Olympiad, Globe-to-Globe took these ongoing experiments in intercultural exchange to a new level. Presenting Shakespeare’s 37 plays and non-dramatic poems in 40 languages over an eight-week programme, Globe-to-Globe launched an interactive paradigm for a planetary Shakespeare.

The Bitola Shakespeare Festival is making the next major contribution to this exciting venture. Between 19-26 July it will present eight Shakespeare plays and adaptations in seven languages by companies from Europe, Asia, and North America. The opening co-production of Romeo and Juliet by the National Theatre of Macedonia, Skopje, and the Vera Kommisazhevskaya Theatre, St Petersburg  enhances the kind of artistic and cultural reciprocity which Globe-to-Globe modelled so successfully.

The closing production of Richard III by the National Theatre of China, Beijing, will give local audiences a chance to watch the critically acclaimed Globe-to-Globe production in a new setting: the 1st-century BC Roman amphitheatre in Heraclea Lycestis on the outskirts of Bitola. Spectators will also be able to see the much-anticipated classical Chinese costumes and properties that accidentally failed to reach Shakespeare’s Globe in time for last year’s performances.  With them included, this year’s production will enrich the cultural dialogue between Asian and Western Shakespeares which NTC actors performed so enthrallingly in plain costumes on a bare stage.

Performing Shakespeare in non-English languages raises fascinating questions of translation into contemporary verbal idioms and diverse visual and performance traditions. Festival audiences will be able to gauge the strengths and limits of Shakespeare’s openness to such appropriations in Taganka Theatre Moscow’s production of Twelfth Night, and in Nina Sallinen’s Finnish adaptation Poor, Poor Lear. Santa Barbara’s Lit Moon Theatre production of The Tempest will also explore the story and audience dynamics of an English postcolonial fable in a post-Soviet setting.