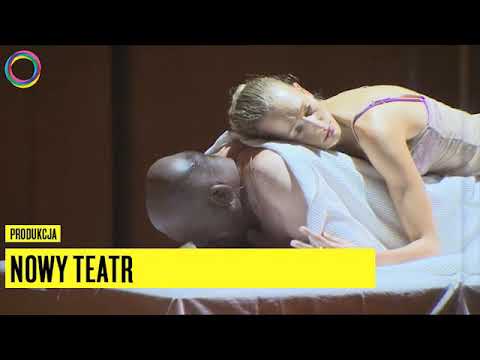 In “African Tales by Shakespeare,” director Krzysztof Warlikowski and actors from Nowy Teatr return to Shakespeare in a production which places Othello, The Merchant of Venice and King Lear, alongside with John Maxwell Coetzee’s Summertime and Wajdi Mouawad’s monologues (which were especially written for the play). In this thought-provoking five-hour theatre show, Shakespeare’s protagonists – Lear, Othello and Shylock – are depicted as outcasts who share a single fate and are thus played by the same actor. In the program notes, Warlikowski explains how “Even in the most civilized communities, the Jew, the black man and the old man still evoke aversion, hatred, anxiety and fear”. The text from Coetzee, the South-African Nobel laureate who grew up under the apartheid, helps to highlight the experience of what it is to be an outsider. “African Tales” is an unusual piece, which transcends the literary works it invokes, be it in its representation of a sassy Desdemona, or in the visual references which point to Art Spiegelman’s iconic Maus, and its depiction of Jews as mice and Poles as pigs. Somehow, each character’s pain finds its way to the audience, which also feels discomfort when seeing Othello played by a Polish actor with his hands and face painted in black. Warlikowski makes us feel intentionally uneasy, so as to remind Europe of the perils of hatred and exclusion. This was a Prospero project, an European initiative which aimed to create a common cultural platform between nations.

Make up and hair: Monika Kaleta

scene from The Merchant of Venice

About the show (from web portal devoted to Polish culture) – https://culture.pl/en/work/the-african-tales-by-shakespeare-krzysztof-warlikowski

About the director (from web portal devoted to Polish culture) – https://culture.pl/en/artist/krzysztof-warlikowski