Merchant of Venice in Yemen (The Lamp Will Keep You Company) (Hazaber, 2012) 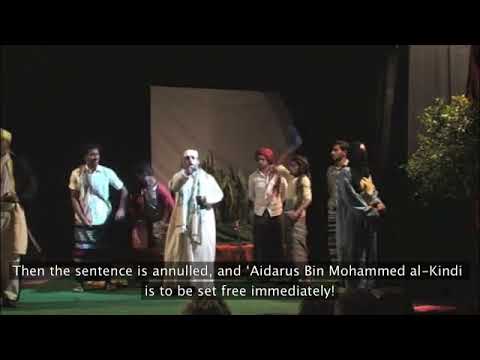 Merchant of Venice in Yemen (The Lamp Will Keep You Company)

This Yemeni adaptation of The Merchant of Venice was performed in November 2012 at the Cultural Center in Sana’a and in March 2013 at the Yemen-American Language Institute (YALI)  in Sana’a.

“The Tale of ‘Aidarus Bin Mohammed al-Kindi,”
A Yemeni adaptation of The Merchant of Venice

‘Aidarus, a generous Yemeni of noble lineage, has traveled far and wide in search of a wife.  After sojourning with various tribes, to whom he disburses much of the money he has brought with him as gifts, he meets Fitna.  Charmed by both her beauty and her intelligence, ‘Aidarus asks to marry her, but her father requests a dowry which exceeds ‘Aidarus’s remaining funds.

‘Aidarus thus takes out a loan from ‘Aidah, a wealthy local cloth merchant.  Certain that he will pay it back by the deadline, ‘Aidarus agrees to the merchant’s condition that he offer a pound of his flesh as collateral.  But the bliss of newlywed life drives the deadline from his mind.  When he remembers and returns to repay his debt, the merchant hauls him before the local judge, the qadi, and demands the pound of flesh.

Honest and courageous, ‘Aidarus admits that he has failed to pay his debt on time; the qadi, though reluctant to inflict such a cruel punishment, believes himself duty-bound to uphold the conditions that ‘Aidarus and ‘Aidah agreed to.  Fitna, disguised as a masked knight, interrupts the proceedings to point out that according to the agreement the merchant has a right to ‘Aidarus’s flesh, but not to his blood.

The qadi, convinced by this line of reasoning, asks ‘Aidah if he can take his pound of flesh without shedding any of ‘Aidarus’s blood.  Stunned, the merchant admits he cannot, and the qadi releases ‘Aidarus.

Though she has saved her husband from the knife, Fitna refuses to reveal her identity to him.  She does, however, agree to visit him at his home in the coming days.  When she knocks on their door disguised once again as the masked knight, ‘Aidarus thanks her repeatedly for saving him from the executioner’s knife and promises to grant any request she makes of him in return.

The masked knight asks to spend the night with Fitna.  Shocked by this insult, ‘Aidarus furiously refuses, swearing that only the rules of Arab hospitality (since the knight is his guest) could prevent him from killing any man who made such a suggestion–at which point Fitna unmasks herself and explains, laughing, that had he agreed she would have killed him.  An amazed ‘Aidarus admits that Fitna’s cleverness exceeds that of anyone, male or female, that he has ever known, and the tale concludes.

This tale is one of three presented in the play ‘Aismur Ma’ish al-Siraj (The Lamp Will Keep You Company); neither of the other two have a Shakespearean connection.  For more on the production of this play, and on the history of Shakespearean adaptations in Yemen, c.f. “Shylock in the Hadhramaut?  Adaptations of Shakespeare on the Yemeni Stage” by Katherine Hennessey, Arablit 3:5, June 2013, http://www.arablit.it/rivista_arablit/Numero5_2013/01_hennessy.pdf.

Some of the actors in this production work for Yemen’s Ministry of Culture, while others do independent work in theater, film, and television. Fāṭimah al-Bayḍānī and the Īdanūt Foundation for Folklore (formerly named Mīl al-ḏahab) are the producers; Wajdi al-Ahdal, Samir ‘Abd al-Fattah, and ‘Abdullah ‘Abbas collaborated on the script.

Al-Baydhani has dedicated her career to preserving and promoting the intangible cultural heritage of Yemen.  She has traveled to each of Yemen’s provinces to collect local oral literature: songs, poems, and stories told by often illiterate performers and storytellers.  She focuses in particular on the work of female Yemeni poets, musicians, and narrators, and in the transmission of oral heritage to from generation to generation.  Her foundation Meel al-Dhahab (renamed the Idanoot Foundation for Folklore in 2013), is a pioneer both in preserving Yemen’s culture and in training young people to document it.

Al-Baydhani commissioned the playscript of ‘Aismur Ma’ish al-Siraj (2012, 2013), which includes the scene drawn from The Merchant of Venice, as a dramatization of a series of Yemeni folktales, using the theater as a vehicle to bring this oral literature to the attention of Yemeni audiences. It is notable that this tale, with its obvious Shakespearean elements, was recounted by a storyteller in a rural Yemeni village; the exact relationship between the tale and Shakespeare’s play remains unclear.

To date, al-Baydhani has also produced five collections of traditional Yemeni music, four illustrated children’s books, and three anthologies of Yemeni fables and fairy tales, which have been published in French, English, and Arabic. She holds a B.S. degree in Anesthesiology from the University of Damascus.

Hazaber has directed more than twenty plays and musicals.  His productions include works by Yemeni authors like Muhammad al-Shami (On the Balcony of the Moon of Sheba, 1997), Muhammad al-Sharafi (Forty Years of Revolution, 2002) and Wajdi al-Ahdal (A Crime on Restaurant Street, 2009), in addition to plays by international authors like Edward Albee (The Sandbox, 2002) and Tennessee Williams (I Can’t Imagine Tomorrow, 2003).

He has also adapted short stories and novellas for the stage, most recently The Republic of Da‘maamistan(2013) and Man and Genie (2013), from the eponymous short stories by Yemeni author Muhammad al-Qa‘ud. The play ‘Aismur Ma’ish al-Siraj, from which the Merchant of Venice scene is taken, is one of several that Hazaber has directed with content derived from the rich heritage of Yemeni folklore.

Hazaber has supervised and directed performances in Egypt, Iraq, and Syria as well as Yemen.  He has earned diplomas in drama, directing, and the theatrical arts, and is a founding member of the National Theater Troupe in the Yemeni city of Hodeidah. Hazaber’s work has won numerous awards, and his artistic career was recently the focus of a documentary by the Yemen Today television channel.  His achievements in the theater have been recognized by the highest echelons of the Yemeni government, which awarded him a Medal of Excellence in 2006.

Al-Dhamari has acted in over one hundred Yemeni productions, often in starring roles, including as Jamila in A Crime on Restaurant Street (2009), as the Prime Minister in The Republic of Da’amaamistan (2013) and as Angelique in the Yemeni production of Moliere’s Le Malade Imaginaire (2010), which ran in Sana’a and in Algeria.

She has worked extensively in television and radio as well as the theater, writing and acting in plays aired by FM Shabab, and presenting programs for FM Shabab and Sana’a Radio.

She is currently completing a B.A. in Telecommunications at   Future University in Sana’a.

Al-‘Ansi has performed in more than a dozen plays, including The Trophy Club (2006), The Last Hour (2005), Yellow Card (2005), and Looking for a Job (2000), and in numerous short plays and dramatic sketches. He has played roles in nine different Yemeni television series, among them Kini Mini and Point of View, and in a radio drama entitled The Team.

He also appears in the feature film We’ve Lost It (2013), and in the documentary Freedom of the Press in Yemen (2009).  Al-‘Ansi has a degree in radio and television communication from Sana’a University, and lives in Sana’a with his wife and their three children.

A favorite with Yemeni audiences for his comedic acting, Al-‘Arasi has acted in twenty-six plays, in Yemen and in theater festivals in Saudi Arabia, Syria, Egypt, and Kuwait.  He has performed texts by Yemeni playwrights such as Muhammad al-Sharafi, ‘Abbas al-Dailami, and ‘Abd Rabbu al-Haithami, and recently portrayed Gassem in the Yemeni production of Saadallah Wannous’s The Glass Cafe (2013).

Al-‘Arasi has a B.A. in radio and television communication from Sana’a University.  He has appeared in eight Yemeni television series, and has written two plays, Sarhan and Qar‘an (2002), and The Ideal Students (1998).

Al-Dhafri is a remarkably versatile actor:  in the 2013 production of The Republic of Da’maamistan, he played the Head of the Delegation and four additional characters; he also rose to the challenge of playing a female protagonist as Abla in Past and Present (2004).  He has acted throughout Yemen, in Saudi Arabia, and in Egypt.

Outside of the theater, he has worked extensively in public relations and in media production management.  Al-Dhafri majored in Communications (Radio and Television) at Sana’a University and plans to continue his studies at the Master’s level.

Information provided courtesy of Katherine Hennessey, who holds a PhD (2008) in English, with a focus on contemporary Irish theater. Since 2009, she has resided in Ṣan‘ā’, researching the history of Yemeni theatre and the impact of contemporary dramatic performances.

Merchant of Venice in Yemen (The Lamp Will Keep You Company)

Performed in March 2013 at the Yemen-American Language Institute (YALI) in Sana’a. The video begins mid-scene, with the characters in traditional Hadhrami (eastern Yemeni) dress. Fitna (in blue, with a...more

Performed in March 2013 at the Yemen-American Language Institute (YALI) in Sana’a.

The video begins mid-scene, with the characters in traditional Hadhrami (eastern Yemeni) dress. Fitna (in blue, with a black cloth covering her mouth and nose) has already entered the square where the qadi is about to reluctantly pronounce judgment on ‘Aidarus, and has pointed out that the qadi’s judgment is correct, but the sentence passed upon ‘Aidarus is wrong. The qadi has angrily requests an explanation of how he has erred. The first line of dialogue we hear in the clip is Fitna explaining that the merchant has a right only to ‘Aidarus’s flesh; when ‘Aidah protests that it is impossible to remove flesh without shedding blood, Fitna unsheathes her sword and threatens to kill the merchant if he sheds even a single drop of ‘Aidarus’s.

The rest of the scene proceeds as noted in the Production Description below; when ‘Aidarus is released, the disguised Fitna explains that she has intervened because she detests injustice, and asks whether ‘Aidarus believes that his wife is worth all of this trouble, and the risk of losing a pound of his flesh. To this, ‘Aidarus responds with a paean in praise of Fitna, whom he describes as the summation of every good quality, and as being worth not merely a pound of his flesh but all of it. The clip ends just before ‘Aidarus invites the masked knight to his home.

Merchant of Venice in Yemen (The Lamp Will Keep You Company) : Full Video