Someone Is Sleeping in My Pain: An East-West Macbeth (Roes, 2001) 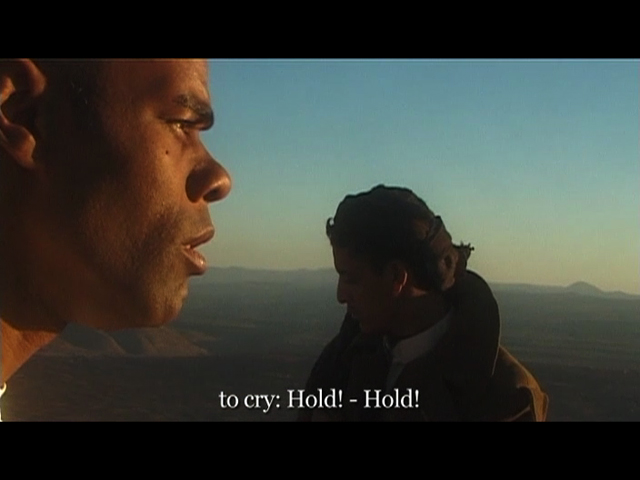 This 2002 film adaptation of Shakespeare’s Macbeth is directed by German poet and director Michael Roes. He later published a novel Nah Inverness (2004), which features two diary accounts. One is by Hal Dumblatt, an American director determined, against all odds, to film Macbeth in the Yemeni hinterlands, using Yemeni tribesmen as actors. The second account is written from the perspective of Ahmed, a Yemeni officer appointed to report on the film crew’s activities. The novel’s plot is based on real events: Roes took a small film crew to Yemen in 2000 to film his adaptation of Macbeth, entitled Someone is Sleeping in my Pain: Ein west-östlicher Macbeth. Throughout Roes’ career he has developed a keen interest in East-West cultural exchange. In many of his works, he explores the possibilities of forming meaningful connections with other cultures.

Michael Roes, born 7 August 1960, is a novelist, poet, anthropologist and filmmaker with a focus on exchanges with foreign cultures. He studied Philosophy, Anthropology and Psychology at the Freie Universität Berlin and holds a diploma in Psychology (1985) and a PhD in Philosophy (1991). He completed his PhD thesis, a study on the sacrifice of sons (Jizchak. Versuch über das Sohnesopfer, 1991), in Berlin and has conducted anthropological field research in Israel and the Palestinian territories (1987,1991), Yemen (1993–1994), and the United States (Native Americans in New York State 1996-1997). He was a Fellow at the Institute for Advanced Studies in Budapest (1994–1995) and has held a guest professorship at the Central European University, Budapest (2004; 2005/2006). He has drawn inspiration from a wide and diverse range of cultures in his work, including Native American culture, featured in the novel Der Coup der Berdache; contemporary China in Die Fünf Farben Schwarz; and the Islamic world in Leeres Viertel, Weg nach Timimoun, Nah Inverness, and Geschichte der Freundschaft.

Story in the German weekly newspaper Die Zeit about their shooting process in Yemen: http://www.zeit.de/2001/06/Shakespeare_gefaehrlich_abgedreht/seite-

Brief excerpt from Mark Thornton Burnett’s analysis of the film (Professor Burnett is a member of Global Shakespeares‘ advisory board). The following excerpt is posted with Burnett’s permission.

Someone is Sleeping in My Pain tells the fictional story of an unnamed American film director (played by Andrea Smith) who travels from New York to Yemen to make an adaptation of Macbeth. Andrea Smith, a renowned dancer, is the only professional actor in the cast, the rest being amateur performers, mainly Yemini tribal warriors. Two Macbeth narratives co-exist within the frame, then; the first concerns the film director’s overweening ambition to stage Shakespeare’s play in seemingly inhospitable terrain (making him a type of Macbeth in his own right), and the second centres on the ‘actual’ production which emerges. As a result, the film inhabits a number of genres, among which is the documentary, while the process of its creation is reflected in the extent to which extemporization is reinforced as an interpretive strategy. In this connection, visual coding is a significant clue. Colour photography signifies the film director’s efforts; black-and-white discovers the Shakespearean counterpart. Hence, in black-and-white sequences where tribesmen participate in a traditional circular dance, with daggers drawn and drums playing in the background, we are sensitized to the translation of Macbeth and to its apposite accommodation with the Yemini world.

Featuring the main character Andrea Smith (who died some years ago)

Someone Is Sleeping in My Pain: An East-West Macbeth : Full Video