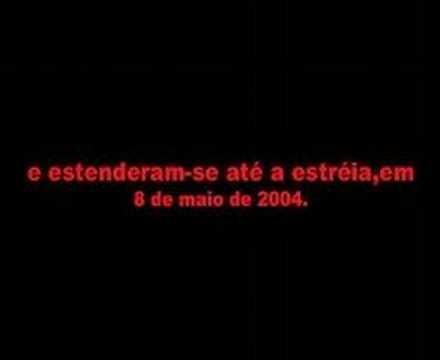 Macbeth, herói bandido (2004) is a stage production of Shakespeare’s Macbeth (1606), produced by Cia. Rústica (Rustic Theatre Company), an autonomous theatre ensemble based in Porto Alegre, in the state of Rio Grande do Sul. It is one of the most active and prolific troupes in the city, promoting relevant research projects and award-winning theatre shows.

Macbeth, herói bandido, directed by Patrícia Fagundes, is the first production, presented in 2004,  of a project carried out by Cia.  Rústica, entitled “In Search of Shakespeare” (“Em busca de Shakespeare”), which includes A Midsummer Night’s Dream (2006) and The Taming of the Shrew (2008). Since its inception, the guideline of the project has been to create a festive, popular Shakespeare, developing contemporary artistic languages for staging his plays, and using a  polyphonic network of resources for scenic composition, such as words, music, video, dance, physicality, among others.

In Macbeth, herói bandido, the aim of the group was not to transpose the action of Shakespeare’s play from medieval Scotland to contemporary Brazil, but to appropriate Shakespeare’s text and create a new fictional universe of violence, power disputes and chaos based on contemporary references. The performance is the result of a collaborative process, involving several months of investigation, improvisation and discoveries. The production premiered on May, 8th 2004 at the Dante Barone Theatre, followed by a season at the Renascença Theatre, both based in Porto Alegre. The show also integrated the agenda of the International Festival Porto Alegre em Cena in 2004.

Further information on the project “In Search of Shakespeare”, by Cia. Rústica, can be found on the company website https://ciarustica.com/em-busca-de-shakespeare/ and in this shared document https://www.dropbox.com/s/feshba90vh1vowe/CIARusticaRevista_27.11.2017_alta_4.pdf?dl=0