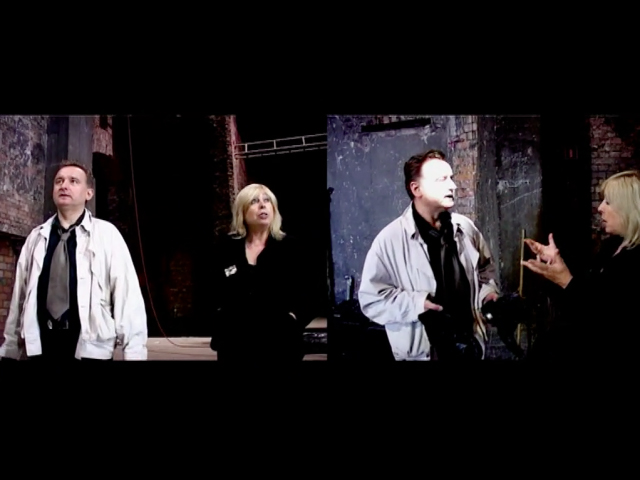 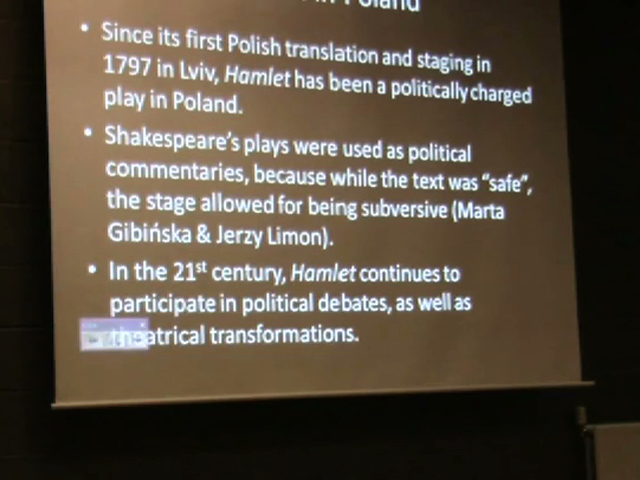 Hamlet from Gliwice. A Rehearsal or a Touch through the Pane by Lothe Lachmann Videotheatre “Beyond”

Based on Hamlet, with excerpts from the works of twentieth-century Polish playwrights Stanislaw Rozewicz and Helmut Kajzar

In Videotheatre’s adaptation, Hamlet’s story functions as a mirror and a mask. The Shakespearean myth reflects as well as reconfigures childhood memories, wartime experiences and theatrical reflections of Piotr Lachmann. Apart from quotations and allusions to Shakespeare, the script includes excerpts from the works of Tadeusz Rozewicz and Helmut Kajzar, two distinctive 20th century Polish playwrights, known for their poetic exploration of everyday life. Both of them have been important for Lachmann as writers and friends.

Born in 1935 in Gleiwitz as a German, Peter Lachmann was rechristened as Piotr in Polish Gliwice a decade later.  This meant a political, linguistic and religious transition, which irrevocably estranged him from the mother, who never learned Polish and had to adjust abruptly to postwar conditions of life. The new reality has also made Lachmann question the memory of his German father, a local football star drafted to Wehrmacht, never to return from the battle of Stalingrad. The feelings of loss and solitude, emblematic for Hamlet’s experience in Elsinore after his father’s death and his mother’s hasty remarriage, constitute the core of Lachmann’s poetic play.

Similarly, the motif of memory, along with the uneasy relationship between forgetting and forgiving, frequently reappears in “Hamlet from Gliwice.” In this adaptation, keeping the memory of the father becomes both a duty and a burden to the protagonist. While the mother urges him to remember, the hero struggles with the postwar guilt as a German raised in Poland. Hamlet from Gliwice does not ask who killed his father, but rather whom his father killed while in Wehrmacht. The play thus becomes the means to catch the conscience of the author, actors, and the audience, rather than that of the murderer (in this production Claudius is imagined as Hitler).

Metatheatrical elements are manifest throughout the production, which is framed as a rehearsal, with the actors entering in casual clothes to read the script. Zbigniew Konopka and Jolanta Lothe enact not only Hamlet and Gertrude or Lachmann and his mother, but also actors arriving to Elsinore. Most prominently, they perform themselves, contemporary actors attempting to communicate particular emotions and situations to the audience. Lachmann is present during the whole event as a VJ, a video performance artist, processing selected visual materials in real-time. Positioned on the side of the stage, he mixes, records and remasters the images, remaining a controlling force in the production, as well as a live testimony to the events in the play. Occasionally Lachmann interacts with the actors, as in the scene in which he plays football with Konopka, recalling the image of his father.

Throughout the production, video recordings and projections blend with live presence of actors, expanding temporal and spatial dimensions of the stage, mixing wartime period with present times, Gliwice with Warsaw. Konopka and Lothe interact with images on screen, while exploring the notions of presence and absence, presence and past, or memory and loss. In Lachmann’s definition, screens function as “mirrors of another time;” in Hamlet from Gliwice they reflect the desire to return to the childhood and to the loved ones, in order to touch the dead, albeit only through the pane of a screen.