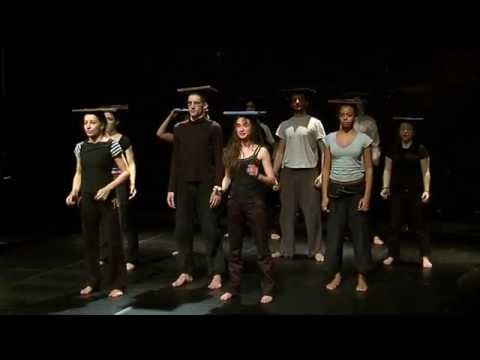 “To be or not to be”
prev next

Hamlet or Three Boys and One Girl

Adapted and directed by Nikolay Georgiev

This is an amateur video recorded by Hrvoje Felbar at the TEST! festival in Zagreb, Croatia, on 22 March, 2010 (official language of the festival was English). The production is largely improvisational and the actors rely little on memorized cues and speeches. They use their own improvised English lines.

The production won the “critics’ prize” at the IX International Student Theatre Festival “TEATRALNY KOUFAR” in Minsk, Belarus, in July 2012.

The group mounted another performance in Bulgarian in Theatre Hall of Sofia University, Sofia, Bulgaria, 12 March 2013.

After Hamlet’s “to be or not to be” speech in English, the ensemble turn to Bulgarian, repeating, in Bulgarian, the preceding cues in English and a redaction of the Shakespearean lines. When Hamlet ends on “fear,” Death joins in and tells him in Bulgarian: “Here, take some fear … Fear … the eternal source of every act of submission.”

Georgi Niagolov (Assistant Professor at the Department of British and American Studies at Sofia University) writes “The Tragedy of Hamlet, Prince of Denmark is arguably the most popular of Shakespeare’s works in Bulgaria. The text has been [been taught] in the school curriculum ever since 1884 and has steadily grown in momentum throughout the 20th century. After the 1950s the communist regime embraced Hamlet as a forerunner of socialism who sacrificed himself in the struggle against the evils of the (proto-)capitalist world.”

Georgiev’s experimental production has been regularly produced at the Sofia University Theatre Hall since 2001. Professor Niagolov has identified three themes in the production, namely:

(1) The production “deployed Jerzy Grotowski’s ideas of stripping down histrionic pretense to lay bare the actors’ genuine intimacy and opening theatrical space, both material and mental, to involve the audience in the performance.”

(2) It regarded Shakespeare and his characters as our contemporaries and “used Jan Kott’s interpretation of Hamlet as the tragic story of three boys and one girl (Hamlet, Laertes, Fortinbras and Ophelia) who are forced to act against their nature being locked in an intolerable social and political environment.”

Hamlet’s “to be or not to be” speech after the dance Recorded by Hrvoje Felbar at the TEST! festival in Zagreb, Croatia, on 22 March, 2010.more

Recorded by Hrvoje Felbar at the TEST! festival in Zagreb, Croatia, on 22 March, 2010. less