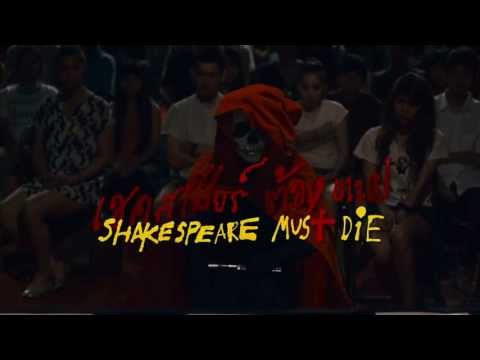 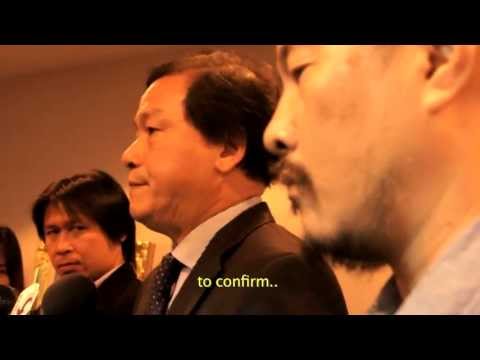 With the support of the Ministry of Culture, Creative Thailand Fund, Office of Contemporary Art and Culture

Although the Thai government’s Ministry of Culture initially helped fund director Ing K’s adaptation of Macbeth, entitled Shakespeare Must Die (2012), the film failed to the meet the censorship board’s approval. In April 2012, the film was officially banned, and the director Ing K (Ing Kanjanavanit) and producer, Manit Sriwanichpoom, immediately filed an appeal. Over a year later, the saga continues, but they continue to fight for the release of their film.

The film is a metatheatrical exercise in the powers of play, whether that is the performance of a dictator, the performance of a Shakespearean play, or a blurring the two. Like a good revenge tragedy, some of the most inherent critiques of the larger political system revolve around the play-within-a-play. In this case, a theatre troupe stages the tragedy of Shakespeare’s usurping tyrant in a nation (an unnamed country/fictionalized Thailand) ruled by such a despotic leader. The tyrant halts the production of the play. Ing argues that the film speaks on a global level concerning any of a number of recent dictators:

“I feel like we are heading to a very dark, dark place right now, a place full of fears and everyone has to be extra careful about what they say. …When Cambodians watch this they’ll think it’s Hun Sen. When Libyans watch it they would think it’s Gaddafi.”

The Thai government, on the other hand, found the film’s depiction of Dear Leader (the Macbeth character) too close to home. Shakespeare Must Die was outright banned for release in Thailand by the government because the film “has content that causes divisiveness among the people of the nation.”   There are similarities between this fictional dictator and the recently ousted Prime Minister Thaksin Shinawatra (2006), as well as other allusions to previous coups and political unrest in Thailand.

Ing K is appealing the ban, claiming that she is “in the trenches” in this war against politicized censorship. “My camera is my weapon.” Using her “weapon,” she has worked with producer Manit Sriwanichpoom to create a complementary documentary Censor Must Die, which had its first screening at the Bangkong Art and Culture Centre on June 1, 2013. Caesar Must Die is currently under review by the censors. In this bizarre case of art resembling life, this documentary becomes Banquo’s ghost, a haunting reminder of the initial crime of banning Shakespeare.

Director Ing K, in a panel on “Art and Censorship,” discussed how Thai government control on all forms of medi contributes to the overall disintegration of Thai culture. In her speech, reminiscent of many dystopic novel’s storylines, the government promotes dull fare and commercialized safe media over intelligent, controversial, and, most importantly, thought-provoking films:

“By trying to control our imagination, the Thai state sees all the arts and media through the prism of propaganda and social engineering. … The state believes that you can socially engineer The People to be Good by showing examples of Goodness and Decency and suppressing all examples of Evil and Indecency.”

This is why the censors think my version of ‘Macbeth’ is a “disgrace to Thai public morality and the Patriotic Dignity of the nation,” as well as being violent and divisive. They really don’t understand that you can learn from a bad example: a man who could have been great who loses it all through his insatiable greed and ambition. In ‘Macbeth’ and ‘Shakespeare Must Die’, we essentially watch a man examine himself and then deciding to self-destruct. That’s exactly why I chose to do ‘Macbeth’. Shakespeare does have the potential to be especially disturbing for Thai people, precisely because he is the best antidote to propaganda, to the bombastic mindset. Shakespeare is deeply spiritual, deeply moral, yet totally non-judgmental, non-moralistic.”

Interview of the director, also by Colleen Kennedy

When ‘Shakespeare Must Die’, a Thai film adaptation of ‘Macbeth’, is banned by the Thai government for reasons of national security, producer Manit Sriwanichpoom treks through the corridors of power...more

When ‘Shakespeare Must Die’, a Thai film adaptation of ‘Macbeth’, is banned by the Thai government for reasons of national security, producer Manit Sriwanichpoom treks through the corridors of power to unban his Shakespearean horror movie. The resulting cinema verite is the living story of a struggle for justice and human dignity, for freedom of expression, which Thai filmmakers do not have. A dark cinematic record of democracy in action, in all its farcical, obscene and heartbreaking details. less

The official movie trailer of “Shakespeare Must Die”. The feature film from Ing K and Manit Sriwanichpoom.

Shakespeare Must Die (เชคสเปียร์ต้องตาย), an adaptation of Macbeth, has become the second film to be banned from commercial release by the Thai Film Board under the Film Act of 2008. less