No video is currently available for this production.
prev next

Eight Days to the Premiere

8 päivää ensi-iltaan (Eight days to the premiere) is a Finnish film inspired by Romeo and Juliet.

According to Nely Keinanan’s research, the film has no global distribution and is only available in Finland. A few individual owners are selling their copies on Amazon.com; thank you Olwen Terris (Project Researcher, British Universities Film & Video Council) for the lead. 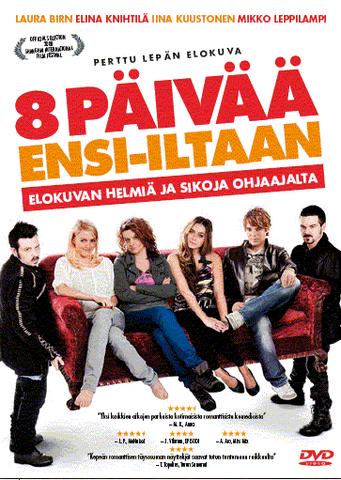 A theater group is putting on Romeo and Juliet. With only 8 days to the premiere, Noora, who is playing Juliet, is injured during rehearsals. Vilma, the prompter, is called upon to take her place. Vilma was previously a promising acting student, but she is still suffering from stage fright brought on by the death of her boyfriend in a car accident. After a disastrous beginning, Vilma and Lauri begin to fall in love both onstage and off, though Noora does everything she can to disrupt their relationship and get back onstage. Vilma is particularly frightened to play the final scene, as she still hasn’t gotten over her boyfriend’s death. But she finds unlikely support from Ros, Gil and Head, ghosts of actors who died in the theater.

Eight Days to the Premiere