A Midsummer Night’s Dream which premiered in 2002 was produced by the Yohangza Company of Seoul, South Korea and was directed by YANG Jung-ung, who also wrote the Korean script.

LEE Kangsun was commissioned by the Asian Shakespeare Intercultural Archive (A|S|I|A) to translate the stage directions in the Korean script into English, these stage directions being missing from the company’s English subtitles (by Alyssa KIM).

The production toured to the Barbican in London in 2006, and was invited back to London in May 2012 at the London Globe as part of the World Shakespeare Festival.

With a small but versatile cast (many of whom play several roles), the adaptation focuses on the key plots of the two pairs of lovers and the battle between the fairy king and queen, with a twist. Their kinetic energy is remarkable. Bottom is called Ajumi, a superstitious elderly woman gathering herbs in the mountains. The adaptation draws on traditional Korean folklore to portray the world of the fairies (dokkaebi). Puck is portrayed as twins played by two talented actors in one robe.

Review in London Korean Links about the performance in the 2012 Globe to Globe Festival.

For behind the scenes information:
http://asianow.kr/menu02/m02_sub03_1.html 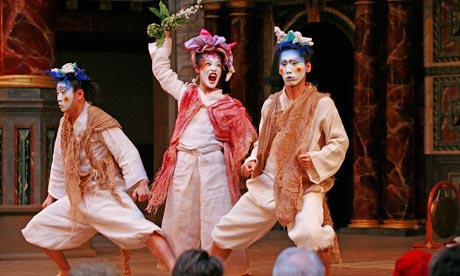 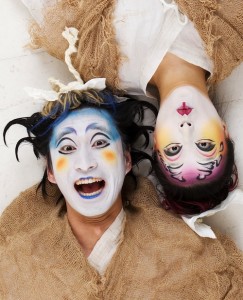