No video is currently available for this production.
prev next

This 2011 Mexican production of The Tempest, a joint venture involving Mexico’s National University (UNAM), National Institute for the Fine Arts (INBA), and Metroploitan University of Mexico City (UAM), served, among other things, to commemorate the 400th anniversary of the play’s first staging.

By having the stage, film, and television actor, Ignacio López-Tarso starring in the show, the play attracted even wider audiences than usual. Fittingly, his casting as Prospero was to a large extent due to the fact that López-Tarso made it his personal priority to play the lead once more, and for the last time, in an UNAM production of a Shakespeare play, after having performed as King Lear in the 1980s, so as to close his involvement with what he himself terms “the finest theatre made in Mexico”. This 86 year-old man is considered to be one of the country’s finest actors; despite his age, his experience and distinct voice made a striking Prospero. Working alongside such an established and renowned personality were both excellent young professionals from different acting schools and older actors from Mexican vaudeville and commercial venues, making it a productive combination of styles. The mix of actors comments upon the way youth and maturity interact in the actual play.

A slanted platform recalling a deck, a dock or a pier transforms into a ship, an island, or a library depending on how the mast is used and the ropes disposed. A few objects such as a chair and a couple of barrels help to define the space represented on stage. The flexible scenery underlines the sense of wonder and discovery present in the play.  In key moments such as the shipwreck and the banquet, a projector enhances the visual aspect. Lighting with blue, green, and purple hues emphasizes the fantastical quality of the island’s magic. The lights also establish contrast and aid the audience to keep track of the different stories in the play.

The costume design is quite eclectic. Prospero and Miranda wear ragged and self-made clothes that characterize their exile. As Miranda falls in love, her clothes change. Ariel, a very flirtatious female spirit, wears a blue corset and headdress that convey her airiness and stylized movements. The rest of the faeries are topless, only wearing skirts made out of leaves; their attire evokes Polynesian or Hawaiian dancers, but their dance is contemporary. Caliban is characterized as half reptile; his appearance foregrounds difference. Alonso and his men contrast with the inhabitants of the island; they wear more sober clothes with a slight hint to the Spaniard conquistadors. Although this is a Mexican production, the theme of colonialism was not stressed through the play.

The character’s costumes are not the only exotic sights of the island. The compelling atmosphere of the place is created through sound. Music is the vehicle of magic: the percussive music of the faeries dancing, finger cymbals for Prospero’s mild spells, strings for painful magic, Ariel’s alluring songs… These musical effects complement Alfredo Michel Modenessi’s excellent translation, conveying both the play’s poetical majesty and its keen sense of humor through Mexican idioms and different varieties of Spanish for Trinculo and Stephano. For over two hours, we question and examine how freedom, restraint, obedience, and rebellion take part in the most basic human relations. Yet, all is complicated with the erotic tensions that underlie many of these relations. Forgiveness seems to be the solution. 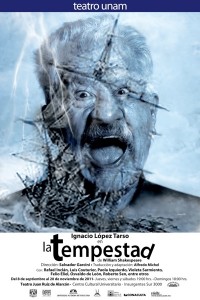 Edgar Omar Moreno-Master of a Ship