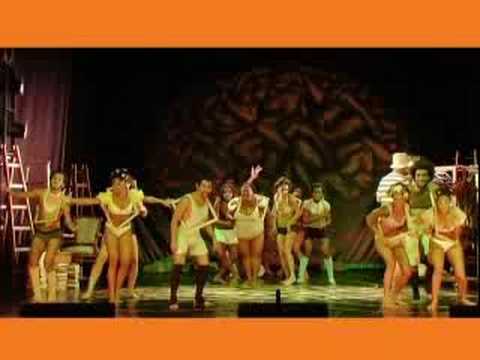 institutional video about Nós do Morro
prev next

Commissioned by the Royal Shakespeare Company as part of the Complete Works Festival in 2006, the award winning community theatre company Nós do Morro (We from the Favela/Hillside) displays a fresh and energetic performance of Shakespeare’s The Two Gentlemen of Verona. Switching effortlessly from the comic to the serious, the plotline is infused by vibrating music and movement. The actors’ bodies become central to a physical theatre which dispenses with elaborate props or sets: actors resourcefully stand in for scenery, playing furniture, buildings and walls. Even Lauce’s dog, Crab, receives a scene-stealer performance. Cloth is used for various ends: to mark out space, as costume and as letters. For instance, the love letter Julia receives from Proteus is made of cloth patches, loosely stitched together. Samba and *capoeira, supported by a trio of onstage musicians, are rhythmically punctuated by the Afro Brazilian instrument *berimbau and help to culturally locate the play in Brazil as well as set the tone and pace for Shakespeare’s tale of friendship, love and betrayal.

Dois Cavalheiros de Verona (The Two Gentlemen of Verona) by Nós do Morro was performed in Stratford upon Avon at the Courtyard Theatre  at the Royal Shakespeare Theatre Company’s Complete Works Festival, and at The Barbican Center in London  in 2008. The production has also been shown in several cities in Brazil.

*Berimbau is a stringed instrument built from a gourd. It has its roots in Southern African culture but has been incorporated into the Brazilian art of capoeira

*Capoeira is a Brazilian Martial art that combines elements of dance and music.

Songs and music for Nós do Morro: Gabriela Geluda

Songs and music for Nós do Morro: Wellington Soares

Workshop with Cecily Berry, for The Complete Works Festival, Stratford, 2006.

institutional video about Nós do Morro

Nós do Morro (Us from the Hillside) is a community based theatre company and school based in the Vidigal[i] Morro, one of the largest favelas (shanty towns) in Rio de Janeiro, Brazil.more

Nós do Morro (Us from the Hillside) is a community based theatre company and school based in the Vidigal[i] Morro, one of the largest favelas (shanty towns) in Rio de Janeiro, Brazil. Perched on a hillside overlooking the rich districts of Leblon and Ipanema, with fantastic views of the Atlantic Ocean, is the house where Nós do Morro has trained actors, technicians and other art professionals. Founded in 1986, it has over 350 participants, among them children, youngsters and adults who reside in the Vidigal Morro. In over twenty-five years, most of which relying on their meager finances, Nós do Morro consolidated its roots in the heart of Vidigal while also achieving recognition nationally and internationally.

Nós do Morro was founded by a group of friends inspired by the dream of journalist Guti Fraga, who wanted to create a cultural movement in the Vidigal community, similar to the ones he had seen in Harlem, New York. His idea was to use the local talent to portray the rich universe of the favela and create work of excellence. His conviction in the transformative power of art is clear in his successful history with Nós do Morro. As Fraga explains: “The only way to change stereotypes is through quality. That is the only way. One word that I don’t want near my work is pity. Pity is an ugly word. It makes the pitier feel better and the pitied feel worse. So you have to break through that emotion with quality, first and always.”[ii]

Nevertheless, it is true that the favelas dominate the landscape of Rio de Janeiro and map the socioeconomic disparities of Brazil. Yet, the concept of “cidade partida”[iv] (split city), i.e., a city divided by morro (hillside) and asfalto (tarmac) is challenged by Nós do Morro’s theatrical practice. It is indeed through art and hard work that the young actors from the Vidigal favelasucceeded in breaking through class and cultural barriers that are so entrenched in Brazilian society. Cicely Berry, director of text and voice at the Royal Shakespeare Company, describes the impressions of her first visit to Vidigal in these words:

I’ll never forget that first visit, leaving behind the pomposity of the coastline with its beautiful mansions safe behind iron bars. I remember being taken uphill through a tortuous pot holed road, the water flowing downhill, where life happens in the streets, where commerce unravels all the time and you feel this amazing enthusiasm for life. I remember this intense sensation of enormous joy.[v] (136, my translation)

While Cicely finds a fabulous zest for life in the favelas, it cannot be denied that they are dangerous places where drug culture is rife and work is scarce. Despite all this, Nós do Morro produced many plays where the favela is at once the stage, the protagonist, and theme. Plays such as Encontros (1987), Biroska (1989), Abalou – Um Musical Funk (1997), É Proibido Brincar (1998), and Noites do Vidigal (2002) describe the every day reality in Vidigal. In these plays, the favela represents more than just the backdrop: it becomes an aesthetic language that challenges the outside discourse which always depicted the favela and its inhabitants in negative terms. With Nós do Morro, the favela found its way to present its own discourse from the inside-out.

In the face of hardships in the initial stages when the company had no sponsors, rather than seeing problems, Fraga sought creative solutions. Theatre critic Tânia Brandão recounts an anecdote about recycling trash to use as props which exemplifies Fraga’s philosophy of creating opportunities through art[vi]:

(…)the trash was really scanty: there were mostly soy oil cans…. No problem: from the cans, lights were made. The first lights. Trash then helped to solve one of the greatest difficulties which was lighting, a technical resource whose cost is too dear. Soon they moved to another stage because the oil cans turned out to be insufficient. But this act of searching in oneself, of searching within, of going to the trash cans to catalogue one’s own means to structure a project impressed me. It was not a tribute to poverty, but the deliberation that poverty is not and cannot be an obstacle for the realization of one’s dreams. It was the manifestation of a legitimate spirit of fight.  (126, my translation)[vii]

Inspired by Fraga’s faith in the ability of performance as an agent of social change, the company has produced a versatile repertoire of plays and audiovisual productions, achieving significant public recognition. They earned international respect with the movie City of God (2002), Brazil’s most successful film internationally. Forty-two actors from Nós do Morro created some of the hardest-hitting scenes in a violent, graphic depiction of the evolution of the drug trade in a Rio favela. The company’s success led to important partnerships such as Petrobrás and the British Council, the latter becoming a decisive path towards the group’s successful association with Shakespeare.

Nós do Morro: Actors and Musicians[viii]

Shakespeare and Nós do Morro

The syntony of Nós do Morro with Shakespeare became evident to Cecily Berry during a dramatic reading of Hamlet at the Fórum Shakespeare project, in 1995. Since then she has been collaborating regularly with the company, bringing with her the philosophy that “Where words prevail not, violence prevails”[ix].

Shakespeare’s plays are indeed an open invitation to experiment and a fantastic chance to “hear a thousand things through other tongues”. Nós do Morro adds a fresh vibrance to Shakespeare’s plays through the voices of the samba school that originated in the favelas, the effervescence of street theatre, and the ingenious and colorful settings.  Not afraid to appropriate the English playwright, they transpose him into their local reality, while declaring such appropriations as “intromissions”.

Their first stage adaptation of Shakespeare, Sonho de uma Noite de Verão: uma Intromissão do Nós do Morro no Mundo de Shakespeare (Midsummer Night’s Dream: an Intromission from Nós do Morro in Shakespeare’s World), directed by Fernando Mello da Costa (2005), began with an inside joke: a group of amateur actors rehearse to perform for the court, an unambiguous parallel to Nós do Morro’s history.  Drawing on the theme of social exclusion and subversion in Midsummer Night’s Dream, Nós do Morro’s production establishes a parallel between the “rude mechanicals” in early modern England[x] and the trash pickers in modern Brazil. The creative set uses recycled materials such as ropes, handkerchiefs, bottles and other objects, and the festive mood is supported by the music played and sung by the actors.

Soon after Midsummer, Nós do Morro was invited for a workshop with The Royal Shakespeare Company. A year later (2006) they returned to Stratford-upon-Avon to perform The Two Gentlemen of Verona (directed by Guti Fraga) at the Complete Works Festival. Performing without props or sets, the actors put on a vibrant show playing furniture, buildings and walls. The performance was punctuated by Brazilian music and capoeira[xi] which helped situate the play in Brazil. In 2008, the group was invited to return to England to perform at the Barbican Theatre. Receiving both critic and public acclaim in England and in Brazil, it had now become clear that Nós do Morro managed to transcend the limits and stereotypes of the map and offer alternative configurations to the theatrical and human landscape of Rio de Janeiro. They have decisively inscribed themselves into the History of Brazilian Theatre.

Since 1986, Nós do Morro has presented over 35 plays sustaining the mission of providing young people with an opportunity to experience culture, art and citizenship though the theatre and visual arts. Their Audiovisual Centre has produced four short films written by young people, winning international awards in France and Brazil. Many of its actors have appeared in Brazilian TV series, soap  operas and movies.

[i] Vidigal was “pacified” in November, 2011. The policy of pacification tries to establish state control in areas that were previously controlled by armed drug traffickers.

[iv] Cidade partida (split city) is a term coined by journalist Zuenir Ventura in 1994 to designate the socioeconomic structure of Rio de Janeiro. In this view, Rio de Janeiro is seen as socially and culturally split in two distinct geographic areas: the “morro” and the “asfalto”, with limited social and cultural permeability between the two. Morro refers to the shanty towns on the hillside, whereas asfalto (tarmac) refers to the urban areas where the upper classes live. In recent years, however, there have been many successful attempts to promote the transit of artistic and cultural productions from the favela to other sectors of society and confront this historical exclusion. Nós do Morro is a successful example of this movement.

[xi] Capoeira is a Brazilian Martial art that combines elements of dance and music. It originated with enslaved Africans who wanted to devise a method of disguising their training by combining it with dance-like movements, singing and musical instruments such as berimbau. Capoeira became a symbol of resistance to the oppression and is considered a cultural heritage of Brazil.